As I sit here typing this post, my best friend and cat of 15+ years is by my side. We've slept in the same bed, cuddled on the couch and "worked" side by side (and when I say "worked" in his case, I mean "napped") for longer than I've been a mom or a wife. We've moved six times together and weathered BIG changes– like me getting married and having kids– with our relationship intact. We've been insperable. 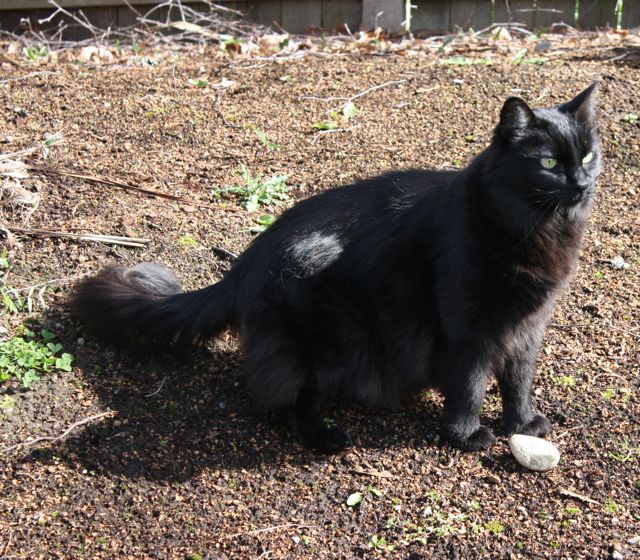 But the cruel march of time is forcing our friendship to end… and it's breaking my heart.

I first met Gus (short for "Asparagus," from the musical Cats) years ago when I was a starving law student and he was an innocent, trapped behind the cold steel bars… of his cage at the animal shelter.

Looking back on those days, my life was a little lonely. I worked from 6 am-3 pm at a local TV station then made the looong journey from Seattle to Tacoma to go to law school. I was always rushing around and trying not to get fired OR kicked out of school. I needed a roomate who could deal with my long hours and give me emotional support.

My friend Mindy and her then boyfriend helped me get Gus from the Seattle Animal Shelter and even took care of him for a few days until I moved into my new apartment in Seattle. After visiting the shelter with me, Mindy STRONGLY suggested I get Gus. He was already an adult and she was concerned he'd have less of a chance of being adopted.

He was such a handsome cat, with long black fur, piercing jade eyes and a question-mark tail. I fell in love immediately. We were simpatico. I'd try to study and he'd walk all over my papers. I tried to sleep and he'd plop himself down on my stomach and wake me up. It felt good to be needed and loved in a very non-needy way. It was a blissful existence.

Then I met another Mr. Right. This one had two legs and an allergy to cats. I was VERY concerned. Would three be good company? That first day, Mr. Right sneezed and wheezed. His eyes were red and swollen. He was itchy and uncomfortable. But he stayed. And so did Gus. And somehow. Mr. Right got through his allergies, and before you could say "catnip" we were married and all happily living together.

Mr. Right would pick Gus up and take him "on tour" around the apartment to see all the things he couldn't get to. I'd pop a dance CD into the boom box, scoop Gus up and dance with him in the window.

A move out of state followed. Mr. Right and I were both working long weird hours and one or both of us was frequently out of town. I didn't have any friends in the jungle of LA– except Gus. Sometimes I wished he and I could go out to eat and take in a movie together. He was a loyal, loving friend and made me feel like a million bucks when I straggled in after a challenging workday.

Another big move followed… then a house, kids… the years rolled by. Now a distingushed gentleman, Gus was adept at drinking out of water glasses (instead of his water bowl), tripping me as I walked downstairs and meowing me awake when he felt I was sleeping in too far past 5 am. He was puzzled by– yet tolerant of– the children but at his essence, still very much "my" cat.

Then… maybe about 9 months ago, things started to change. Gus lost a lot of weight and we learned he had thyroid and kidney problems, which I guess are pretty common for older male cats. Always impeccably groomed, his gorgeous fur became thin and he lost interest in keeping up appearances.

He was always hungry but then didn't want to eat whatever I gave him. Multiple trips to the vet, tests and medicines were futile. As I sat in a small gray exam room earlier this week, the vet tried to kindly tell me he wasn't ever going to get better. To add to the mix off issues, he now had a tumor in his tummy and even if it was benign and they could remove it… these other problems would mean he either wouldn't survive the operation or if he did, wouldn't last long.

As the vet continued rattling off facts I felt like… well… I couldn't think. I was stuck. What was she saying? With tears rolling down my face, I implored her, "What would you do if this was your cat?"

That was four days ago. We've been given five days to treat Gus like a king. I made him a chicken and he's been feasting on it and milk all week. At this point, nothing really stays down anyway and I want him to enjoy his time with us. My once big kitty of 12 pounds is down to an uncomfortably bony 5. He used to love getting "stretched" and scratched under his chin but I think it hurts him now. I try and gently stroke him on the head instead.

Countless times over the past few days, I've told Gus "Thank you for being such a good friend." "You are the best cat in the world" and "I love you." Even though I don't think he understands my words I know he understands my heart.

Animals trust us with all they've got and I am feeling crushed right now by that responsibilty. Like many elderly humans, his mind is strong but his body has worn out and I, as his friend have to make "that" heartbreaking decision. Except, as a human who loves their cat and doesn't want him to suffer, there really isn't a choice to make.

Gus has given me a beautful gift of pure best friendship. I am already dreading coming home to a house where he doesn't greet me at the door and I am devestated by the thought that I won't be glimpsing his black shadow out of the corner of my eye.

I want to thank my dear Gus for his sweet and loyal friendship and I hope one day in the distant future, when my body fails and my time comes, we can be together again, loving, annoying and cuddling each other on that big couch in the sky.

« Pinterest Party #28: A Bird and A Bean
How to Incorporate Color into Your Look »