Holla! Did the title of this blog post grab your attention? You might be wondering what could a craft-loving, 40-something mom of two have in common with a music superstar? As it turns out, plenty. We’re both trying to make sense of ourselves and our lives. And we’re each striving to do better. Heck that pretty much sums up the human condition! Maybe that’s why so many people connect with Macklemore’s music. 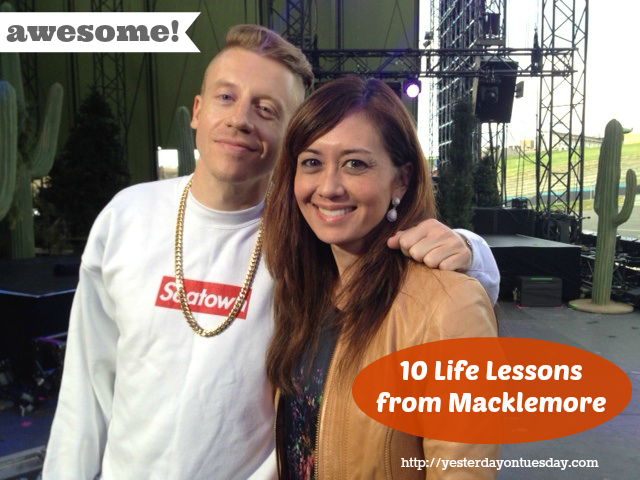 I recently had the opportunity to spend an afternoon with Macklemore (real name Ben Haggerty) and two members of the group– Tee Wanz and Ray Dalton. When I think about all three of these guys, the first words that come to mind are grateful and gracious. Here are some of the things I learned from my time with them.

Macklemore & Me: 10 Lessons Learned from the Rapper

1. Lesson: Don’t do what everyone else is doing– do what feels important to you.

Do What You Care About: Macklemore (and Ryan Lewis) make hip hop music about subjects that are unusual to the genre– including frugality, that practice is more important than talent… and same sex marriage. They are writing and producing music about things that are close to their hearts and on their minds– NOT what they imagine people want to hear, but issues they care about personally.

2. Lesson: Be authentic and be open to the happy surprises that flow.

Be Open to Surprises: The success of Thrift Shop was very unexpected. Macklemore said it was not a song that he thought would be a major hit and was surprised when it took off on. Think about it– a song about the joy of thrift shopping doesn’t seems like a tune that fits in our top-40 mentality. But people loved the video which went mega-viral on YouTube and they were crazy about the song.

3. Lesson: Be proud of where you come from.

It’s Cool to Be Proud of Where You Come From: Seattle has been invigorated by the Macklemore effect. He grew up in Seattle and wears that with pride. Is Seattle a city known for rap music? Well, we do have Sir-Mix-A-Lot… and to misquote a line from a Macklemore song, “He is TOTALLY awesome…” but many people would probably think the Emerald City as more grunge than hip hop. But he’s proud of his city and the city is THRILLED with him. Macklemore even writes in the song Can’t Hold Us: “I got my city right behind me if I fall, they got me.” 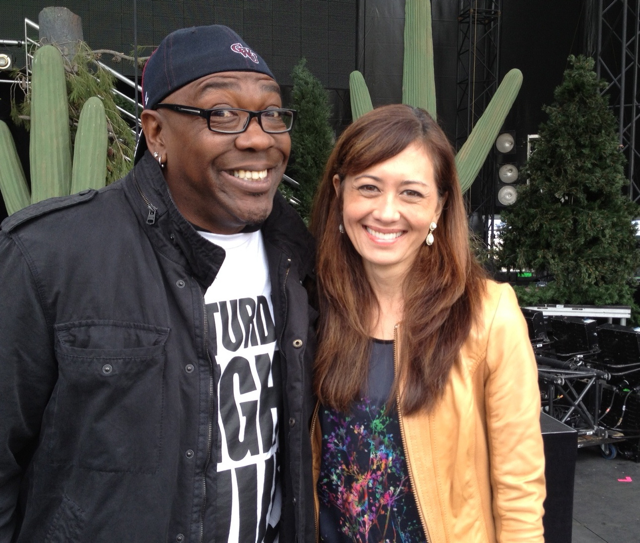 4. Lesson: Don’t limit yourself– life is what you think will happen combined with what could happen. And “could” covers a lot of territory.

Life is what you think WILL happen combined what COULD happen: Do you know the Tee Wanz’s (real name Michael Wansley) story? He’s the man with the  smoky pipes on “Thrift Shop.” Tee has been singing all his life but his music never materialized into a career. He was a 50-ish Microsoft employee he got a call to lend his voice to a song, same thing he had done countless times before and stayed largely anonymous. But there was something different this time– the song was “Thrift Shop” and unlike many artists, Macklemore not only gave Tee credit, they brought him on tour– something he told me artists pretty much never do. Tee might have imagined himself working at Microsoft for the rest of his life. Now he’s on tour with the biggest thing in music and can look forward to an amazing career with his own music.

5. Lesson: Just because things have been done a certain way doesn’t mean it makes any sense or that it’s the right thing to do.

If “The Rules” don’t work for you, They Aren’t Your Rules: I didn’t know much about how the music industry operates but what I understand is that the traditional model is the label. You get with a label and they get you exposure.  To quote Macklemore in his interview with Correspondent Neal Karlinsky on ABC’s Nightline (aka my husband), “A label is a glorified loan; they’re just – with horrible interest rates.” Haggerty and Lewis decided that wasn’t going to work for them. So they decided hire an agent solely to help them get on the radio. And that worked out pretty well for them!

The only person you can control is yourself: In the song Make the Money Macklemore writes, “Make the money; don’t let the money make you. Change the game, don’t let the game change you.” He also raps about consumerism and materialism. So who’s he preaching to? In an interview for ABC’s Nightline, he told Karlinsky, “I’m talking to myself. I am far from a perfect human. But I am on a pursuit of trying to find fulfillment, trying to be happy, trying to sustain that fulfillment and that happiness. And, these songs become my reminders.”

7. Lesson: Do things Grandma (and your best self) can be proud of.

Do Stuff Grandma Can Be Proud of: The song “Can’t Hold Us” is an uplifting and inspirational anthem. The man with the dreamy voice is Ray Dalton– a young tennis champion and gospel singer who sang with Seattle’s revered Total Experience Gospel Choir. Ray is close with his family, including his Grandma. When asked how he Grandma likes the music Macklemore and Ryan Lewis create, Ray said not only is his Grandma a big fan– but that if she didn’t like the music, he wouldn’t be a part of it. According to Ray– his grandma like Ben’s words and she thinks he’s a sweetheart.

8. Lesson: Seek out partners that make you better– not necessarily people you always agree with.

Collaboration Makes Things Better: Brian Haggerty and Ryan Lewis are friends and collaborators. When asked about their relationship, Macklemore said that while they don’t always agree– they  share an aesthetic, and at the end of the day, that’s what matters. Separately Both Macklemore and Ryan Lewis would be awesome, but together they are amazing.

9. Lesson: Come clean and be honest about your struggles.

Be Honest: Macklemore had substance abuse issues but managed to get clean in 2008. In 2011, he had a relaspe. He writes about it in the song Starting Over and the pain he experienced when he had to look his Dad in the eye and tell him what happened. With fans and other people in recovery looking up to him and seeing him as a role model, Macklemore could have chosen NOT to say a word about his relapse, but he did and that has made him a role model in a new way– when you mess up, come clean.

Practice Gratitude. One quality that all these artists have in common is that they are grateful. Macklemore writes about spending half his life chasing this dream. Tee Wanz held his dream in his heart for decades until it came true (in a big way). They are so thankful for their fans, and for the people that have supported them in their lives. Even when they are physically and emotionally exhausted (and haven’t had time to pay bills, do laundry sleep or in their own beds) they still have that strong sense of being grateful.