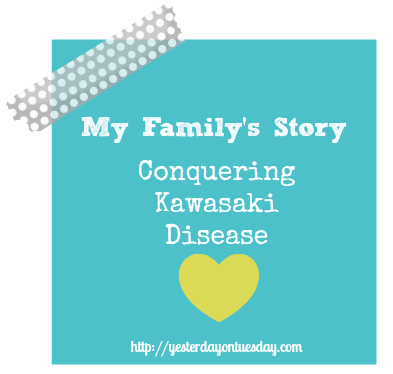 Families deal with all sorts of things in life– good, bad and downright scary. Today I am sharing the story of my daughter’s Kawasaki Disease on the fourth anniversary of her diagnosis. I’m hoping that by writing about our experience, we can help another child/ family recognize the symptoms and get treatment. 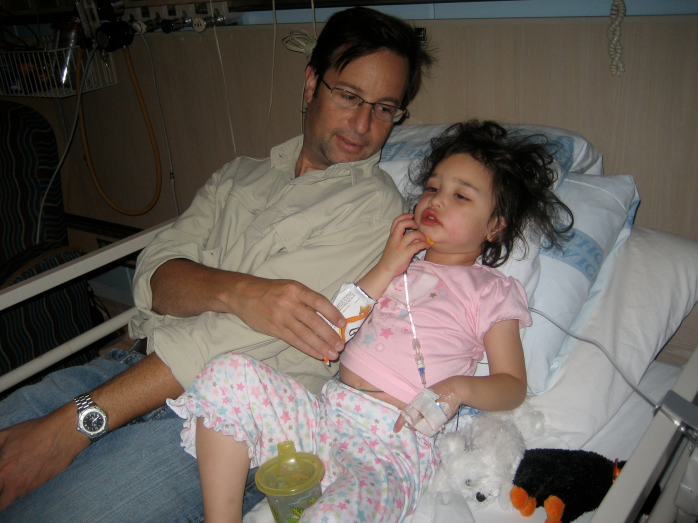 It started with a fever that wouldn’t break. I remember Seattle was experiencing a heat wave that summer…. it was hot and uncomfortable in my house. We didn’t have air conditioning and the heat seemed to just hang in the air at night. My husband was out of town. He’s a journalist and was in the middle of a wildfire in Northern Californa. I was at home with my 2 year old daughter and 5 year old son. That night, already in a restless sleep, I woke up to hear my two year old wailing.

I threw myself out of bed without thinking (like Moms do) and stumbled into my daughter’s room. When I picked her up out of her crib, her skin literally felt burning hot.  I immediately knew it was no ordinary fever. Frightened, I tried to soothe her as I coaxed her into swallowing some Motrin. I waited for the Motrin to kick in but it didn’t. It was around midnight when I drew a cold bath for her. The water seemed to help with the fever and it gave her a distraction. After the bath, I rocked her to help her fall asleep. Her head on my chest literally hurt me– it was that hot.

Of course I couldn’t sleep that night. As soon as the doctor’s office opened the next morning, I called to make an appointment. Our regular pediatrician was on vacation, but they could get me in with another doctor that day. I dropped my son off at camp and headed for the doctor’s office.

When we arrived, my daughter was still hot to the touch. He lips were dry, red and cracked. and strangely, her hands were too. Although I knew something was very wrong, I wanted to believe she just had a flu bug and that the congestion just hasn’t started yet.

When we saw the doctor, he was calm and kind. He listened quietly as I described her symptoms. Then he examined her and called for some blood work. I remember him looking at her body under her clothes and seeing a red rash that hadn’t been there when I dressed her that morning.

I left the office feeling a little bit better. It was just under and hour when I got a call from the doctor on my cellphone. “Don’t panic… but you need to pack your bags and go to Seattle Children’s Hospital immediately. They are waiting for you.” Confused, I asked him what was going on. That was the first time I heard the words “Kawasaki Disease.”

I was terrified as I flew across the bridge to the hospital. As we checked in, all kinds of doctors, nurses and researchers were in my face. I remember one saying my little girl might need a heart transplant. A heart transplant? I remember thinking, How does a kid go from being a totally healthy kid to needing a heart transplant in less than 24 hours?

And it was then I learned about Kawasaki Disease. It’s named after the Japanese pediatrician who discovered it/wrote about it in 1976– Tomisaku Kawasaki.

No one knows what causes Kawasaki Disease. Many researchers think it’s an autoimmune disease, like multiple sclerosis. Others think you can “catch it” like the flu. In any case, it’s terrifying. At the hospital we were at, before a doctor will make a diagnosis, a patient has to present five of seven symptoms:

– Fever that is higher than 101.3 and is non-responsive to fever medication

-A rash on the trunk of the body

My daughter had four of the symptoms, and while we were in the exam room, a fifth presented itself.

So there I was, in a room at Children’s Hospital in Seattle, with my Mom (who is usually pretty tough but seemed to be even more frightened than me) and my baby who was suddenly deathly ill. My husband had no cell service so I had to call his Bureau Chief in LA. I remember a rude Desk Assistant answered the phone and would not put me through to the boss. I had to beg… it was awful. Since I had worked at the same place a  few years before, I pleaded with him to let me speak to one of my friends who worked there– Derek or Marilyn. By the time I finally got the boss on the phone I was in tears. He promised to find my husband and send him home. 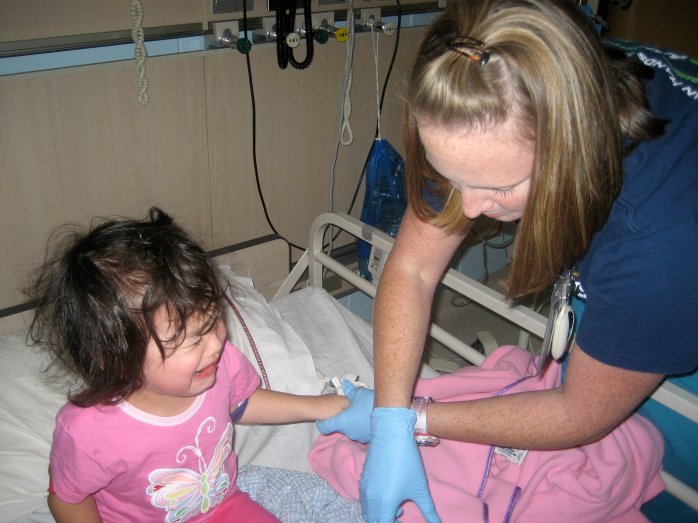 What if Kawasaki Disease is Left Untreated?

If untreated, it can lead to vasculitis which is an inflammation of the blood vessels. That’s scary because it can affect the coronary arteries, which supply blood to the heart. A small percentage of children die from complications from the disease. Yeah, it’s a little terrifying.

Soon, my husband flew in from California. It cut my anxiety in half to have him by my side. At the hospital, they explained that once a patient presents five of the symptoms, the patient is a candidates to receive IVIG (Intravenous Immunoglobulin). It is given intravenously and has been proven to lessen the risk of suffering a coronary aneurysm. They also give the child high doses of aspirin to help keep the fever down and prevent blood clotting. I think my daughter was able to start getting the treatment after a day or so of being in the hospital. We were hopeful but really scared. While the treatment helps most kids, there are no guarantees. It was awful watching the nurse put the IV in my baby’s tiny hand. It takes a long time for the medicine to enter the body and the patient has to just lie there still… tough for a two year old.

My little girl was such a trooper. Her little body was ravaged with peeling skin and her lips and eyes were so red. But she was still her outgoing self, patiently letting the doctors and researchers poke at prod her. Every morning a whole group of them would come around and discuss her condition. I recall at one point, someone came in and asked if we would be interested in our baby receiving an experimental treatment instead of the IVIG. I couldn’t believe how crazy that was– why would anyone take a chance with their child’s life when there’s a treatment that works for so many? Needless to say, we didn’t do it. 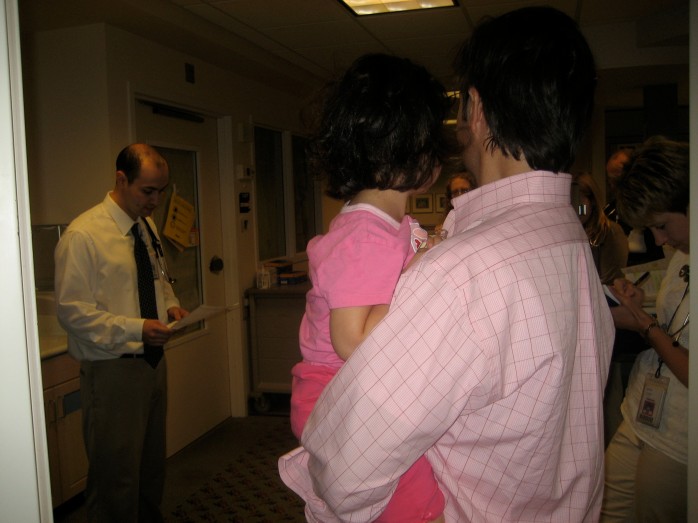 After four days or so of being in the hospital we got good news– my little one’s body had accepted the treatment. All you Mamas out there know… there are no words. We were so grateful. I had been praying and talking to God the whole time we were in the hospital. Even asking for my daughter to just be able to live felt so scary and it still does.

There were follow-up tests and more follow-up tests but overall, it looks like the treatment was successful. Since the disease has only been identified since 1967, there isn’t a ton of information yet about the long term prognosis. We are part of a group of Kawasaki patients in a long-term study. I go through times where I don’t think about the Kawasaki Disease at all… but then there are still times when I feel so worried about it still. But mostly I am so grateful for that pediatrician that figured it out and sent us to the hospital that day.

All children are gifts and this experience made me really take that idea to heart. Today my little girl is a sweet and spicy seven year old and a joy to her family each and every precious day. If you child ever gets a fever that can’t be brought down with the usual methods and there are no other symptoms of cold or flu– get them checked out. If found early, Kawasaki Disease is treatable… you can conquer Kawasaki Disease.

Note: These are my memories of my family’s experience with Kawasaki Disease. I am not a health care professional, just a Mom (!), so if you think your child may have symptoms of the disease, I urge you to see a pediatrician.