What a whirlwind weekend.  Making stuff for an upcoming craft sale and for a store that will be carrying some of my products.  Having a stamp-a-thon with my cousin Heather and my friend Ann to get ready. Spending way too much time with a bag of felt and a die cut machine. Walking around with a post-surgery swollen upper lip, making me look like Marge Simpson or the victim of a collagen injection gone bad.

And then… like a gal on the prairie stuck in a storm… blindly marching ahead… braving the elements… with no food… no water… only hope to sustain me… I waited 5(!) hours at a bookstore to meet Pioneer Woman. I am exaggerating about the lack of food and water, (this particular bookstore has a food court). BUT IT WAS STILL HARD.  Even Laura Ingalls Wilder would have been wiped out.

Are you familiar with Pioneer Woman?  Her real name is Ree Drummond.  In a nutshell, she's a city girl who met a hunk, married him and moved out to the country to live on a cattle ranch and raise their four children.  She's also a fun and fabulous cook and great writer. 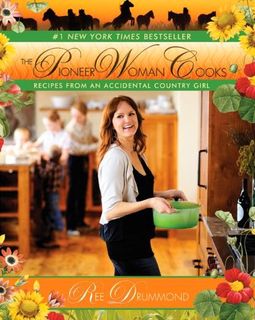 And she's lovely and gracious which explains why there were hundreds of fans waiting forever to meet her. I was already tired when I got to the store.  I had no idea it would be such a long wait.  But after the first few hours, I became even more determined.  And more bedraggled.  Which explains this picture. 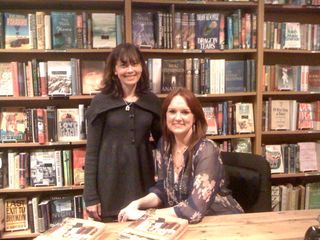 Pioneer Woman was interested in the name of this blog.  I explained that it came from my little four year old, who is timeless (in that she has no sense of time).  Whether something happened an hour ago, last week or last year, she starts her story with, "Yesterday, on Tuesday".  Pioneer Woman loved it.  She said she thought that was so cute.  (She also may have been lightheaded from the small of the sharpie and from signing hundreds of cookbooks).

By the way– in anticipation of a little bloggy makeover and an upcoming etsy shop, I will be doing a very special giveaway.  It's BIG.  Literally.  And I'll give you a hint:  it's something Willa Cather would have enjoyed.

Thanks to all the gals who left comments last week for my first giveaway.  I'll be announcing the winner tomorrow on Tuesday.  What do you think about Pioneer Woman? Would you like to try country living?

Share your thoughts and leave me a comment!  And come check out BlogFrog.  You can find me in the Today's Creative Blog Community among others.  It's a fun way to connect with others and get ideas and tips. 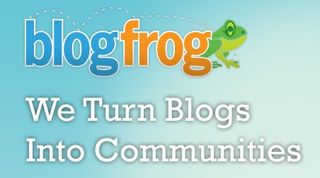