Actually it was more like a truck in the road.

We were REALLY lucky last week. My husband was cycling down a hill, and a truck pulled out in front of him. He had to put his breaks on as hard as he could and swerve to avoid hitting the truck. A witness said he flew 20 feet in the air then he hit the curb with his neck/back. Thank goodness he was wearing a good helmet. It saved him. 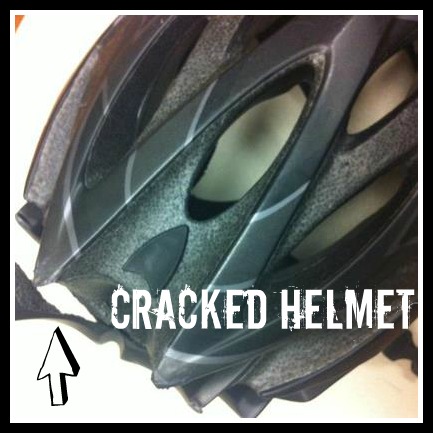 The same person who saw him flying in the air called 911 (thank you!) and help was there in a flash. They put him on a board and took him to the hospital in the ambulance. By the time I got there was off the board and in a big old neckbrace. Which he wanted OFF RIGHT NOW. Luckily, they wouldn't take it off.

He had a bunch of tests and we learned he fractured his C-7 vertabrae. He is so fortunate about which vertabrae he hurt and where. Honestly I can't even think about that now.

That was Wednesday. He's been in a plastic neckbrace for 24 hours a day since then. He is super uncomfortable and in some pain. He can't do a lof of things like take a shower or drive a car. But– seriously if you are going to hurt yourself like that… it's the "best" possible place.

So that's the deal. We are going to a specialist Monday but I do know my husband will be OK and will recover. I absolutely do think he had a guardian angel that day.

I feel badly I haven't been able to get to all the fun blog-related things that I enjoy and I hope to get back to semi-normal soon.

Thanks for hanging in there with me!